Mexico again figures in human rights violations this week.  Please act on this case of persecution of human rights defenders.

FORCED LABOR
The International Labor Rights Forum calls our attention to the exploitation of force labor in Uzbekistan by the Nike Corporation. Please join the protest and call upon Nike to end this nefarious practice. If the form letter comes up with my address, just click on the "not" button and put in your own.

REPRODUCTIVE RIGHTS
Amnesty has an ongoing campaign to help people maintain control of their bodies and their right to make their own decisions about reproduction and sex.   Please support this campaign.

Posted by arkee_titan at 3:11 AM No comments:


We start with an Urgent Action call from Amnesty International on behalf of  an Chinese activist at risk of torture.


URGENT ACTION
ACTIVIST DETAINED, RISKS TORTURE
Activist Liu Yuandong, a businessman, was detained on 23 February in Guangzhou, China after he took part in a protest against North Korea’s nuclear tests. He is at risk of torture and other ill-treatment.
Liu Yuandong, a 35-year-old businessman, protested with several other people against North Korea’s nuclear tests on 23 February in the southern city of Guangzhou. They were all detained, and given administrative detention orders ranging from seven to 15 days for violating the Law on Assemblies, Processions and Demonstrations. All but Liu Yuandong have since been released, and have told the media they were deprived of sleep in custody.

The police told his wife that they were holding him on the grounds that he had "withdrawn the contributed capital after the incorporation of the company" and that they were in the process of issuing a formal arrest notification. His wife, however, has not received any formal arrest notice. Liu Yuandong is detained in Guangzhou city's Tianhe district detention centre.

Liu Yuandong has taken an active part in a number of social movements or protests in China. He was briefly detained after he took part in a solidarity action for the people of the nearby village of Wukan who were protesting against local corruption and land grabs. More than 500 people across China signed a petition in March, within three days, calling for him to be released.
Please write immediately in English or your own language:
n      Calling on the authorities to give Liu Yuandong immediate access to his family, legal representation of his choosing and any medical attention he may require;
n      Calling on them to release Liu Yuandong immediately and unconditionally;
n      Calling on them to ensure that Liu Yuandong is not tortured or otherwise ill-treated.

Also send copies to diplomatic representatives accredited to your country.

Activist and lawyers in China believe that the police decision to investigate Liu Yuandong’s business activities is politically motivated. The police have told his wife that he is suspected of having violated the Criminal Law, Article 159: "Any sponsor or shareholder of a company who, in violation of the provisions of the Company Law, makes a false capital contribution by failing to pay the promised cash or tangible assets or to transfer property rights, or surreptitiously withdraws the contributed capital after the incorporation of the company shall, if the amount involved is huge, and the consequences are serious, or if there are other serious circumstances, be sentenced to fixed-term imprisonment of not more than five years or criminal detention and shall also, or shall only, be fined not less than two percent but not more than 10 percent of the false capital contribution or of the amount of the capital contribution surreptitiously withdrawn."

LABOR ISSUES:
We have a lockout of port workers by a Japanese  company in the United States.  Please donate a few seconds of your time to support them.  We also have both good news and bad news from Turkey.    Please help pressure the Turkish government.

We have an impending execution in Iraq, based on a confession extracted by torture. Please act urgently, it only involves a click or two.

The saga of the Guaneri tribe in South America, in particular in Brazil is a centuries-long tragedy. Please read the post from Survival International and at the end you will find ways in which you can help these long-suffering people, who only wish to be left alone to live their lives.
Posted by arkee_titan at 3:44 AM No comments:

First the  good news: Egyptian blogger and satirist Bassem Youseff  has been released on bail.
While this is encouraging, it is disconcerting that the Egyptian version of Jon Stewart has been picked on by the regime.


We have seen in the past, as in Belarus, that dictators are very sensitive to satire and ridicule. They are very aware that  a public that is laughing at them is unlikely to fear them. We shall monitor the situation in Egypt and keep you up to date.

The same lack of humor has caused the Israeli occupation authorities to detain Palestinian cartoonist Mohammad Saba’aneh under "administrative detention." Please act on the blog request. Our Israeli authorities would do better to relax and smile--of course their monstrous egos would never allow this.

HORROR IN THE MALDIVES
It's hard to believe, but a 15-year-old rape survivor has been sentenced to be whipped 100 times in public! Let's put an end to this lunacy by hitting the Maldives government where it hurts: the tourism industry. 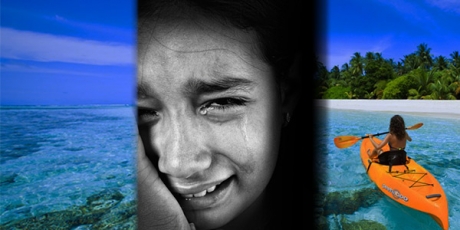 The girl's stepfather is accused of raping her for years and murdering the baby she bore. Now the court says she must be flogged for “sex outside marriage” with a man who has not even been named! President Waheed of the Maldives is already feeling global pressure on this, and we can force him to save this girl and change the law to spare other victims this cruel fate. This is how we can end the War on Women – by standing up every time an outrage like this happens.

A woman died during a police raid in Indian-held Kashmir. Please act on the appeal and send in your letters of protest. This sort of brutal police action cannot be tolerated.

LABOR ACTIVIST IN THAILAND
Andy Hall a labor rights activist is facing a long jail sentence in Thailand for exposing abuses including child labor. He is accused of "broadcasting falsehoods to media" whereas he reported the painful truth . Please act and call upon the Thai authorities to quash this indictment.

Posted by arkee_titan at 1:51 AM No comments: