Dear Friends,
We have a few actions for you this week. As you certainly have noted, this is not an Amnesty International site and we deal with human rights actions calls from a variety of sources. We have women's rights, labor rights, indigenous uncontacted populations and an imminent execution in China.  Please act.

China:
A Chinese woman who killed her husband after suffering months of domestic violence is at imminent risk of execution, after exhausting all her appeals.
According to sources within China, Li Yan is currently held at Anyue County Detention Centre in Sichuan province, south-west China. Li Yan could be executed any day between now and Chinese New Year in early February. Li Yanâ€™s ex-husband, Tan Yong, abused her emotionally and physically from their marriage in early 2009. He frequently beat her, stubbed cigarettes out on her face and during the freezing Sichuan winters locked her outside on the balcony of their apartment for several hours with little clothing. On one occasion, he cut off one of her fingers.

Li Yan required hospital treatment for her injuries after one attack, and contacted the authorities several times including the police. However, they did not follow-up her complaints, initiate investigations or offer her any protection.
In late 2010, Li Yan beat her husband to death with a gun.
Li Yan was sentenced to death on 24 August 2011 by the Ziyang City Intermediate People’s Court for intentional homicide under article 232 of the Chinese Criminal Code. She appealed against the death sentence but the Sichuan Provincial Higher People’s Court upheld the verdict on 20 August 2012. Despite Li Yan’s testimonies about the abuse she suffered and evidence provided by witnesses, the court upheld the death sentence. Her last appeal to the Supreme People’s Court in Beijing was dismissed.
Please write immediately in Chinese or your own language:
n  Urging the Chinese authorities not to implement Li Yan’s death sentence;
n  Calling on them to ensure that Li Yan has access to her family;
n  Urging the National People’s Congress to introduce a legal procedure for requesting clemency in line with China’s obligations under international human rights law;
n  Urging the Chinese authorities to take all allegations of domestic violence seriously, conduct effective investigations and, where there is sufficient admissible evidence, prosecute suspects in fair trials.

South Korean Action: Eric Lee calls for action to support a Korean labor leader on hunger strike
He is protesting the sacking of 137 workers, among them the union president and general secretary, who are being punished for their union activities. They are accused of being leaders of an "illegal organization" -- the KGEU. RAPE VICTIMS IN MOROCCO
16 year-old Amina Filali -- raped, beaten and forced to wed her rapist, killed herself -- the only way she saw to escape the trap set for her by her rapist and the law. If we act now, we can stop this unspeakable tragedy from happening to anyone else.

Article 475 in Morocco’s penal code allows a rapist to avoid prosecution and a long prison sentence by marrying his victim if she is a minor. Since 2006, the government has promised to strike this down and pass legislation prohibiting violence against women, but it hasn't happened.


Please join an AVAAZ petition to the Moroccan government calling for repeal of this terrible law.

INDIGENOUS POPULATIONS REQUIRE PROTECTION
We have three cases from Survival International. One of them involves the Bushmen of Botswana.
Another the Awa tribe who are being pushed off their land by developers in Brazil.  We have a similar case in Peru where exploitation of land and resources are affecting tribal people.

Posted by arkee_titan at 8:05 AM No comments:

We have four actions this week, but they are all click to act cases:

Indigenous people in Peru are in severe danger because of development encroachment on their ancestral land.

Please click and help them. They are extremely vulnerable to diseases brought in by outsiders and could be wiped out completely as happened in the 19th and 20th centuries to many indigenous tribes throughout the hemisphere. Survival International is calling upon the Peruvian government to protect them.

Please sign an international petition to the Chinese government to release the Nobel Peace Laureate Liu Xiaobo and his wife.

DEATH SENTENCE IN SAUDI ARABIA
Recently a young Sri Lankan woman named Rizana Nafeek was beheaded in Saudi Arabia. She was sentenced to death for the murder of a baby in her care when she was 17 -- a charge she denied after being beaten and forced to ‘confess’ to the crime.
Now another woman is on death row awaiting execution by beheading. Siti Zainab Binti Duhri Rupa is a migrant worker from Indonesia, and a mother of two. Police suspect she was mentally ill when she ‘confessed’ to murdering her employer – but her confession was enough to seal her death sentence.
Please act to stop this execution.
The plight of immigrant domestic female workers is a major international scandal, part of the worldwide war on women that rages unrestrained.

US WORKERS IN STRUGGLE FOR BARGAINING RIGHTS
Despite a labor relations board  decision in their favor, workers at a Nevada casino, partly owned by Deutsche Bank, are being denied their basic rights. Please click and tell Deutsche Bank that this is not acceptable.

Eric Lee starts off the new year with three new campaigns for the rights of workers.   The countries targeted are the Phillipines, El Salvador and the USA.

In Egypt, the new government is bent on making a fool of itself. A comedian is being prosecuted for an innocent joke. Please sign the AVAAZ petition to the prosecutor general. Then pass the link on to all your friends and followers on all your social networks.
Posted by arkee_titan at 12:22 PM No comments:


We start with a postcard about forced evictions in Haiti. The object is a bit buggy and you will have to manipulate a bit in Acrobat to read it and use it. Nonetheless, the issue is painful and worth the effort.

There have been threats against the staff of a migrant shelter in Mexico.  Please act on this case.
Posted by arkee_titan at 2:31 AM No comments:


It would seem that during the holiday season human rights activists and organization take time off as well. We have only one call this week, a request from Archbishop Desmond Tutu


Beyond that, all seems quite on the human rights web, but we all know that there will be much more coming. In the meantime, let us join the complacent XKCD  fellow. 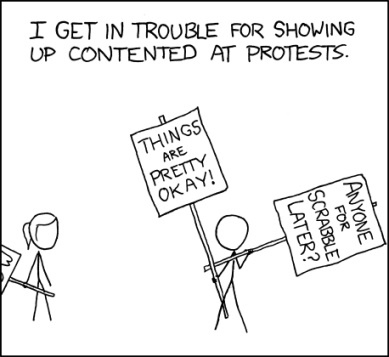