This week we direct your attention to the Global Fund for Women as we mark international women's day.Courageous women and girls around the world are demanding power and resources to realize their rights. Join them and raise your voice in the fight for gender equality.

Indigenous tribes do not simply die out. They are killed by the actions of so-called civilized nations. Survival International provides a long list of cases in which a letter from you can and will make a difference. Please open this link and write at least one letter. This link will be a permanent feature on our blog and we would be grateful if you gave it a bit of attention each week. We suggest going down the list in the order given. The letters are pre-written for you. All you need to do is send them. It would be nice also if a donation to Survival International could be forthcoming.
This week we raise the issue of enforced "progress." and its deadly effect on uncontacted tribes.


Please open the links and post them wherever you can.

The theme of this year’s International Women’s Day is #BeBoldForChange. And the need to be bold could not be more timely. Recent research by the World Economic Forum predicts that the economic gender gap won’t close entirely until 2186. Yes, you’ve read that right! That’s over 170 years away or, put another way: a girl child born today could hope to see her great, great, great, great, great-granddaughter achieve gender equality.

END_OF_DOCUMENT_TOKEN_TO_BE_REPLACED

Imprisoned Woman In Urgent Need Of Surgery Released
Sibel Çapraz was conditionally released from prison on 28 February. She had been in pre-trial detention for almost one year and was in need of medical treatment and an urgent operation. Her release  means she will be able to obtain the vital medical care she needs.

Lee Jin-young is being held in solitary confinement after being formally charged under the National Security Law (NSL) for the online distribution of materials that are deemed, by South Korean authorities, to ‘benefit’ North Korea. If found guilty, Lee Jin-young could face up to seven years in prison. Please act on his behalf.

Please call for the release of Ahmed H who has been arrested on trumped up terrorist charges--part of the world wide campaign of AI. His case is highlighted on the AI home page,

Following international pressure, the Myanmar Army announced that two missing Kachin pastors, Dumdaw Nawng Lat and Langjaw Gam Seng, are now in police custody and face what Amnesty International believes to be politically motivated charges. If convicted they would face up to 6 years in prison. There are concerns for their health in detention.  Please call for their release.

The 21 families of the Ash?ninka Meantari Indigenous community, in the Central Peruvian rainforest, remain displaced from their land due to fear that armed individuals will return and act on the death threats they previously made. Please act on their behalf.

The Lactalis/Parmalat lockout of its entire workforce at Echuca in the State of Victoria, Australia continues. These workers need your support. If you have not already done so CLICK HERE to send a message to the company, calling on it to immediately lift the lockout and enter into negotiations for a fair agreement. 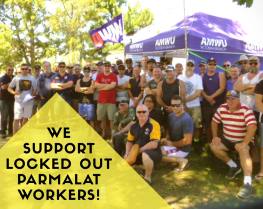